What the Bible Never Told you About Adam and Eve

So God runs out of materials and has to yank a rib out of this poor guy, Adam, to invent the one being who would eventually get him chucked out of Eden, good old Bloomingdales Eve. Fine, I suppose to error is also sublime.
But this girl, the Hillary Clinton of pre-history, hangs out all day with her buddy, the other unaccomplished serpent in Paradise and bitches endlessly about not being given the top job.
Meanwhile, Adam is sweating the naming of every animal of the earth. Of course, the real truth was he found Eve wholly repulsive and the last thing he wanted was to know her in any biblical way. During these first months, he absently named half the new world’s fauna, “Monica,” until God had to smack him.
Well, you know the rest of the story. The snake persuades Eve to get Adam to take a bite of that forbidden apple, called “Viagra,” in the Hebrew Bible, and a million years later Eve is the President of the United States. 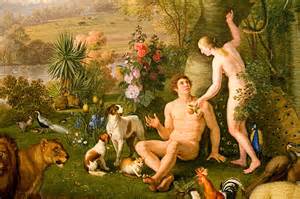