The Who # 8 The First Rock Pope 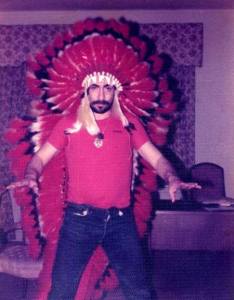 Keith Moon was working as the doorman at the Navarro Hotel in New York on the night  Pope Paul VI died. It was  August 6, 1978, He, ( not the Pope), was wearing a six foot long Indian Chieftain headdress. We were sitting around in Jackie’s room feeling relatively satisfied that Moon’s whereabouts had been limited. According to Mr. Russell, the hotel’s manager, who was  more famous in upper rock circles than any member of the Grateful Dead other than Weir and Garcia, said he was being cordial to the arriving guests and diligently passing all the tips to the real bellman. Besides he had three of our security with him.

Moon arrived at the door with a phalanx of groupies, bellboys, and security still wearing his feathers. “Have you got the news yet?” He was nearly moaning with excitement.” Some Pope is dead! I heard it from a bloke from Indianapolis as I was carrying his bags into the lobby.”

In fact, we did not know this and hearing it first from him lent no credibility to the information. Personally, I was more curious where he got this eagle feather bonnet to begin with. It was real.

He whirled on Anne Wheldon our publicist. Anne on a standard day is too terrified to take a deep breath. “Anne get me someone on the line right now from The New York Times and Billboard Magazine. Go right to the top I am throwing my hat into the Papal ring.” The Times was easy for Anne armed with an exclusive interview with The Who’s drummer.

By now there were maybe twenty assorted people in the room. People always showed up when Keith stopped moving.

He was hunched over the phone with a guy from the Times. We kept as quiet as possible hearing him say, ” I have wanted to leave the band for years”,” they don’t appreciate me anymore”, “No, I am not Catholic yet” and “don’t let that motherfucker Jagger hear about this, he is the devil you know.”

He put his hands over the phone and with panic in his eyes  yelled, ” He wants to know what qualifies me to be the next Pope.” Ever quick, Bill Curbishley shouted back to him” Tell him twenty-five gold albums.”

The Chateau Marmont in LA The Edgewater Hotel in Seatle, and of course, The Navarro Hotel in NY. The most famous Moon story from the Navarro came before me and you can look it up if you like.