The clearest description I have managed so far about my blog is that it is not about cats. In general, I find predators pretty predictable while prey on the other-hand, because they live in universes of anxiety, develop more textured personalities. I also have as a writer a deft hand when it comes to making matters worse, so of course , the already panicky are ready made for me. I will try to grow this blog into an assortment of laughs, because that is what my life has mostly taught me to do. I will use the famous people I have known to get your attention and then tell you small but many times wonderful things about them. I will never name the ones I say ugly things about but I hope you will guess who they are.

I don’t get too tossed about this political correctness phenomenon. After all, when I was around twenty, I said “Groovy” and will still say “hey man” as a greeting, particularly to black people.
My father yelled at me when I was twelve when he overheard me on the phone with an adult speaking disrespectfully. He demanded that I say “Yes Sir or No Sir,” always. I still do this to this day, and I am older than everybody.meir
These rules can be learned.
I stumble clumsily over the speech regulations of today as though they are nuclear intrusions on my civil liberties. Hands always get a little burnt when passing torches. I know I am wrong, but I am stubborn so they can all go fuck themselves.
I have a theory about why these kids see slights that would have seemed not so grievous to my generation. Our millennials are the consummation of three generations of more and more targeted and cautious advertising. When the world does not behave the way it does in commercials, they are fearful and wary. They are suspicious of any gathering that does not accomplish fair representations of races, sexual identities or female /male neutrality. Words are paramount because they are accustomed to dialogue that has been worked and reworked by copywriters and advertising executives not to offend. One poorly placed word can result in the destruction of a Five-hour Energy drink or an Apple iPad. The stakes are huge.
I have two kids in this new generational cluster. I think they are better than me at that age. They, of course, roll their eyes when I behave deliberately in ways that will embarrass them. They forgive me for that, I know. They don’t know yet they will do exactly the same to their children. Nor should they. 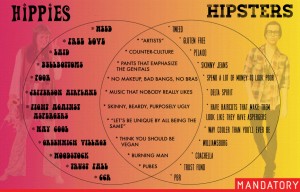